Daedric Music Box is a debut orchestrated score by Kool Khajiit, recorded for the Songs of Cinder series.

Daedric Music Box was announced on November 12, 2014, as a soundtrack to Songs of Cinder, a Morrowind-based fan spin-off by Kool Khajiit, who is also the producer of the album. The story's main theme and the album's opening track, "Cinder Sings", was released the same day on Kool Khajiit's SoundCloud profile, along with the cover. The album is said to be composed of nearly 15 tracks total, each inspired by a chapter of the fanfiction or the event within the story's plot.

The Deluxe Edition, announced days before the album's release, has three tracks featured so far: the remix of the main theme, released as a single, as well as "Dagoth's Resurrection" and "When Ancestors Cry", released on December 14, 2014.

The cover features the armored Urjorahn walking across the ashen wastelands, with the Red Mountain seen in the background. A large daedric letter "Oht" is in the middle, colored red, with the title Daedric Music Box above the letter. 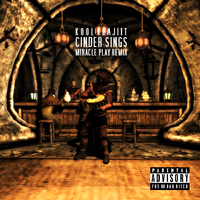 A remix of "Cinder Sings", the main theme, was published shortly after the initial release of Daedric Music Box, on December 9, 2014.

Production was handled by Kool Khajiit under his hip-hop alias Miracle Play and features the genre's signature crisp snares and double-time hi-hats over the original theme's choirs.

The track was released as a single from the album's Deluxe Edition.

Retrieved from "https://tes-sandbox.fandom.com/wiki/Daedric_Music_Box?oldid=239208"
Community content is available under CC-BY-SA unless otherwise noted.